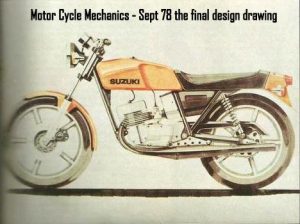 The next in our series where Classic-Motorbikes.net looks back at the machines enjoyed by those of us now in our 50s. What made them memorable and why we loathed or lusted after them?

The X7; the lightest, most agile and therefore fastest of the pack? That’s a well-travelled argument, but whilst I enjoyed the KH250 triple plus several coffin tank 250E’s my mate Mick could only sing the praises of his anorexic Suzuki. It was 1978 and many teens facing the 1980s would blame the X7 for prompting changes to the 250 laws when straight out of the crate a GT250N X7 was recorded at 100.5mph by Motorcycle Mechanics at Chobham’s test track. By 1981 the two-year probation and new 125 learner laws spelt the beginning of the end for the blue haze brigade; although the LC would put the final boot into Suzuki’s X7. Up until 78 all was perfect in our world, we had machines that were more than a match for any 400-4 stroke and we hadn’t even considered taking any type of exam. What remained of our oil splattered L plates hung on grimly to the rear mudguard and we spent our lives just being a nuisance; looking back it’s no surprise those in power moved the goal posts. It wasn’t all great in the motorcycle world, for as the X7 arrived Triumph Norton Villiers was liquidated, Barry Sheene lost out to Kenny Roberts at the final (German) round of the season and musically the year began with Mull of Kintyre as number one and ended with the Village Peoples YMCA; little wonder screaming around the streets at all hours had so much appeal. 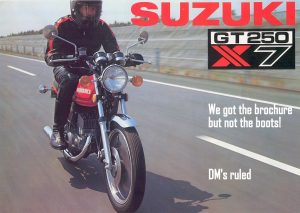 Suzuki had nailed the 250 twin-two stroke back in 1965; called the T20 Super Six (six speeds mid-60s) it offered 29hp and could hit 90mph, although brochures claimed more. The model was launched in America under the title X6 and became the machine that put Suzuki on the biker’s radar, light (in comparison with the competition) with great handling. The Super Six allowed Suzuki to progress into larger two strokes like the T500. It was followed by the T250, a popular model that had served its creators well for three years. The progress resulted in another model for the new decade when Suzuki brought out the GT250 in 1971, although this bore more than a striking resemblance to its predecessor. Initially, the GT was Japan only and the following year received an update with the inclusion of front disc brake. The real changes occurred in 73 with the introduction of Ram Air on the GT250K which actually landed on the shores of Europe and travelled Stateside; for 74-75 the Suzuki remained largely unaltered in the L and M models. In 76 the GT250 went backwards, well the model code did, returning to ‘A’ and the Ram Air was removed. The GT arriving in early 78 was very similar to the machine that was launched in 71 but by the end of that year an all new, leaner, smarter version enjoyed the admiration of many acne suffering British 17-year olds. The X7 had arrived and being 40lbs lighter than the previous GT and an astonishing 53lbs less bulk than my Yamaha 250E it soon became the one to own. It’s said ‘the light that burns twice as bright burns half as long’ and that was true of the X7, officially available for just three years. Not much time for its silky 6 speeds plus electronic ignition to seduce the buyers with 100mph performance from just 29hp … and it had alloy rims! 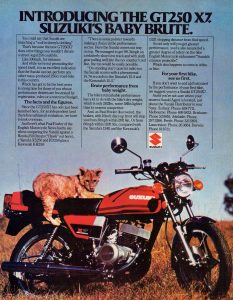 The media-men from Suzuki may well have added ammunition to the authorities argument with advertising campaigns that immediately screamed ‘too fast’. Examples like ‘A getaway bike has never looked so good or performed so well’ along with ‘The new ‘Ton-up’ Suzuki X7’ drew unwanted attention from the Whitehall kill joys. The brochure looked to be more subtle explaining ‘Responsive drivability at high speed and well balanced agile cornering add up to reliable manoeuvrability – all masterly realized within this power machine having a super light -weight body 128KG (dry). Answering the most exacting requirements of the motorcyclist’s needs’… luckily most of us weren’t interested in the poor translation, we were taken by the figures and the ‘well known’ rumour that Marble Straight Red ones with three black tank stripes were definitely fastest. The brochure spec also enjoyed some colourful descriptions (especially pleasing for all teenagers) including their ‘power-reed’ induction that offered ample torque at both low and high revs; that much was true. PEI or Pointless Electronic Ignition was also well proven and would remain around post the X7 whilst the exhausts broke new ground; their shape went from narrow to wide and then narrowed again before opening out at the exit…looked good also. Five way adjustable rear shocks and 10-inch front disc brake that was very efficient (in the dry) to compliment the increased performance; overall the X7 delivered and Suzuki were justified in praising their creation.

In February 2009 Bike magazine spoke to journalist Brian Crichton who was part of the team that tested the X7 at Cobham and Brian still owned the actual bike from the day. He explained that at the time it became obvious history was being made. ‘With advance features like electronic ignition and exotic reed valves combined with its six-speed box, the X7 was a technical Tour-de-Force. At the time I don’t think the press realised what a landmark bike the X7 was’ he continued. ‘The previous GT250 was really peaky with nothing at lower revs thus you had to work hard to keep it on the boil. The X7 had a lot more torque and it pulled in top gear, it wasn’t just an overdrive. Whilst the second prong of the X7’s speed attack was weight, the strong flexible engine package within a tiny featherweight chassis. He concluded, ‘the tuning potential of the Suzuki confirmed by the fact one was mildly ‘adjusted’ to achieved 118mph at MIRA testing grounds with a very impressive 13.3 for a standing quarter mile’. No doubt Brian agreed, the influx of machines like, and especially the X7, brought the situation to a head but the 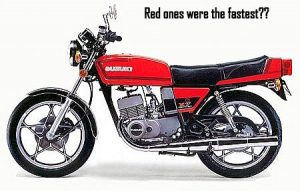 bureaucrats were itching to do something anyway. The 125 rules arrived and killed the 250 scene pretty swiftly, forcing riders to take their test in 24 months; this action would also affect the life span of the X7. Meanwhile ‘On Two Wheels’ magazine got hold of a white X7 in 1978 (my personal favourite but rumoured to be the slowest) and they concluded, riding the X7 was a busy experience. Although better all-round than its previous 250s, at 6,000 rpm the Suzuki became an animal which made the rider consider a little less haste. They also made the point ‘indeed the X7 represented an undeniable attraction to the younger rider, with its considerable performance’ and herein lay the problem; because of its sporty nature the ‘learner rider’ was going to have to learn pretty damn fast.

70s tearaway Gary James, bike shop worker in-period, either owned, borrowed or blagged all of the era’s two wheelers…He always shares an opinion, whether we like it or not! He thinks…Bravely sold in the face of Yamaha’s RD. Cheap yes, but suffered with poor quality finish.  I remember foggy glass gauges, crap mud and chain guards but it was quicker than the RD and in-period that mattered. 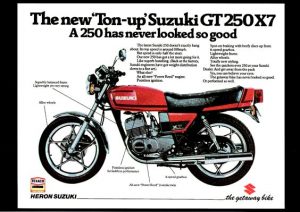 Parliament issued its decision in 1981, stating that from the following October learner riders would have to suffer their induction period on 125cc of just 12hp. As a result, motorcycle injuries did drop from 19k in 1980 to 13k just five years later, but was that due to the slower speeds or less riders on the roads? The 125 law forced youngsters to get their bike licence, get a car or get the bus. This clearly had consequences for the ¼ litre class, including the X7, but many believe the arrival of Yamaha’s ‘Elsie’ 250 the previous May did more to restrict Suzuki’s sales than ‘do-goody’ politicians. No doubt Yamaha knew they would take over ‘top dog’ status and priced their new offering at over £1000; even at 25% higher retail than the competition the LC had no shortage of buyers. It enjoyed 6.5bhp more and was universally accepted as a better all-round machine. Within 3 years the X7 had gone from being heralded as the greyhound of the pack to little more than a 125 on steroids; by the same journalists!

Rummage through any library and it soon becomes obvious the X7 has become largely unrecognised within the pages of classic motorbike literature. Barely mentioned (if at all) with just the odd reference in the pages of the encyclopaedia style publications, whilst the LC is celebrated with great fanfare and even the earlier coffin tank often enjoys a few lines, the X7 along with the earlier GT ‘Ram-Air’ seem to have been forgotten. Surprising when considering the ¼ litre 100mph target for production bikes had been chased and often falsely claimed for at least two decades. Suzuki are generally accepted as the first to succeed (although Guzzi fans may dispute) but the X7 rarely enjoy the adulation many consider it deserved. Most of us who rode a 250 back then would dearly love to own one now; later bikers who missed this era may wonder what all the fuss was about. In a ‘nutshell’ those who took part usually 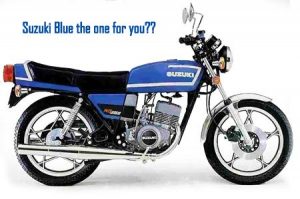 followed a well-trodden path, chopper bike then FS1e, AP or SS until coming of age. Your first ride on any of the periods sporty 250s was universally terrifying, those who say it wasn’t were usually the same blokes who claimed their moped did 75mph. Your first encounter with the narrow ‘power-band’ was always shocking, especially if it was attempted in lower gears. This generation was unique, such performance wasn’t available to 17-year-olds before and once the ‘Safety Police’ realised, that ‘well-trodden path’ would not be offered to the next. In period we spent most money and time making our bikes non-standard and hopefully faster, Microns, K&N filters etc but self-tuning often made things unreliable and slower; whilst the ‘wring its neck’ philosophy didn’t aid the survival rate of bike or rider. The legacy of the X7 is appreciated greatly by those who lived it, far more than the annuals of motor cycle antiquity concede. History may say Suzuki’s lightweight reached the pinnacle of ¼ litre travel and in doing so brought the whole system down; in reality this bike was just an improvement on what came before and riders (many still in school uniform) just couldn’t be trusted with it. 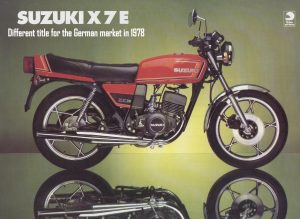 In 2015 an original ‘NOS new old stock’ example became available for sale. The 1979 version in blue had been stored untouched in a suitable environment for 36 years and was snapped up for £9500.00.

Price wise the Suzuki X7 was the most expensive for what was obviously less bike…£749 in August 1978 whilst the RD was £735 and my KH with its extra cylinder a bargain £699.

When the X7 first broke the 100mph barrier Brian Crichton could initially only reach 99.5 even laying prone on the tank; by removing the wing mirrors an extra 1mph was achieved. 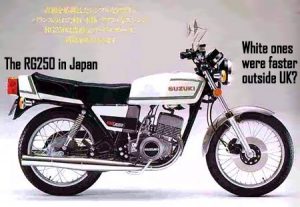 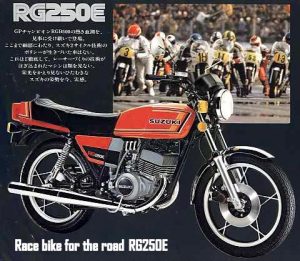